The Crown of Thorns Starfish, is both a pest, and native echinoderm in the region. The problems comes down to numbers and the delicate balance within The Great Barrier Reef. Raising questions about climate change, human effects on the reef, and how to manage the problem. The problem itself is quite not that hard to get your head around, as it eats coral. Too many, and they eat the coral faster than it grows. At a point in time, this starfish was a large concern to reef biologist and other experts, who expressed great concern about the damage they were causing to the reef.

The Balance: is that these starfish eat two of the faster-growing corals on the reefs, the staghorn and platform type corals. In low numbers, this helps add diversity on the reef, and stops the fast-growing coral dominating the reef structure. Too many and the starfish can damage the reef though. Scientist estimate that a reef can cope with up to 15 per hectare of reef, before it starts to show signs of damage. However this number seems very high. With that said, it is all about balance and these starfish do play a role on the reef.

The Problem: Was linked to algae blooms at sea. The Infant Crown of Thorns Starfish, eats algae before it becomes an adult capable of eating coral. As a result of this causal link, the numbers on the reef vastly increased dramatically and reef systems were being damaged. Ultimately there are a few factors at play, the human activity being a key influence in the increase in numbers over the past 100 years since the colonisation of Australia by Britan in the 1800's.

The Human Effect: The increase in algae blooms comes with human activity: farming. Fertilisers and manure from farms washed out to sea provide the essential nutrients for algae to grow. As the nutrients enter the reef system the algae begin to grow and divide into huge numbers, creating an algae bloom. Some of the largest can be seen from space! - The other essential ingredient is temperature and sunlight. As our climate changes the sea temperatures in the region become hotter all year round, increasing the mean surface temperature and providing a perfect breeding ground for algae.

Mitigation & Managment: It is apparent that flood events cause a natural event to transport nutrients from land to the sea; but as humans, we have made steps to help mitigate the effects we have on our reef. The QLD government regulates the amount of fertiliser used on farms so that excess amounts don't end up making their way to the reef. This includes the management of cattle manure and human effluent, so that it undertakes a water treatment process before entering the waterways. - As for the starfish, they are venomous and a hazard to collect with few natural predators. The University of Queensland however, did find a solution. In fact an acid: Vinegar is deadly to these starfish. By equipping divers with syringes of the common ethanoic acid, we have been able to exterminate 45000 starfish effectively and help manage damaged parts of the reef to regrow.

By studying The Crown of Thorns Starfish, we can see that human activity plays a large role in ecosystems both on land and at sea. By understanding how the reef and human environments interconnect, we have been able to manage the problem on the reef effectively. Humans have owned the problems we have caused and with the help of scientists, been able to resolve the problem with an ongoing effort to manage the reef. 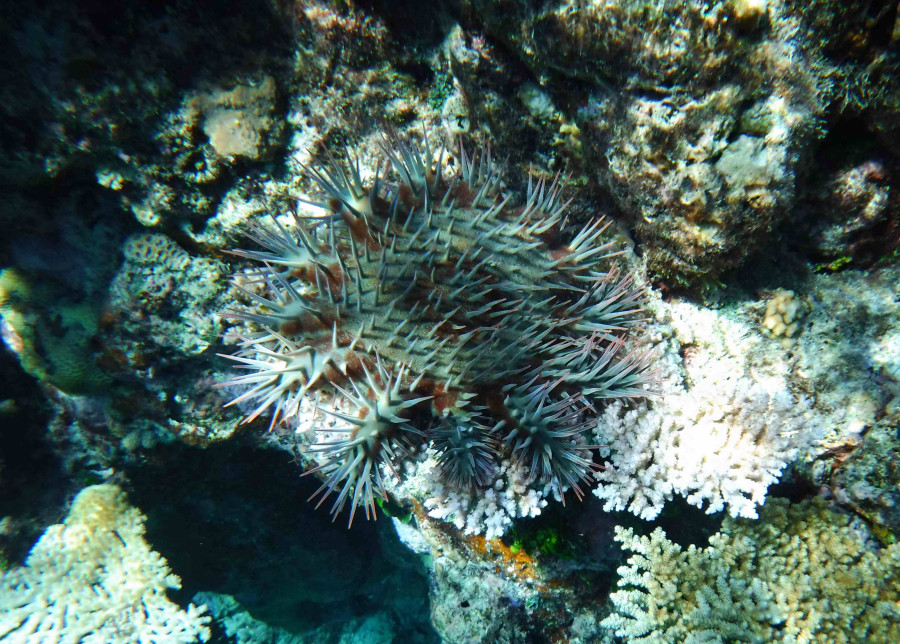