Today the weather conditions at 5am were really surprising considering the surrounding conditions. There has been a persistent haze and overcast conditions about for the past week. Last night however, the camp recieved heavy rain and thunderstorms. This morning I awoke to clear skyes and really good lighting. I decided to fly the Mavic as the opportunity will not come again for some time, as I only have a few days left before returning to the road; to head home to Armidale NSW. The results of the flight this morning were fantastic, and they are good enough to enter my gallery for purchase. 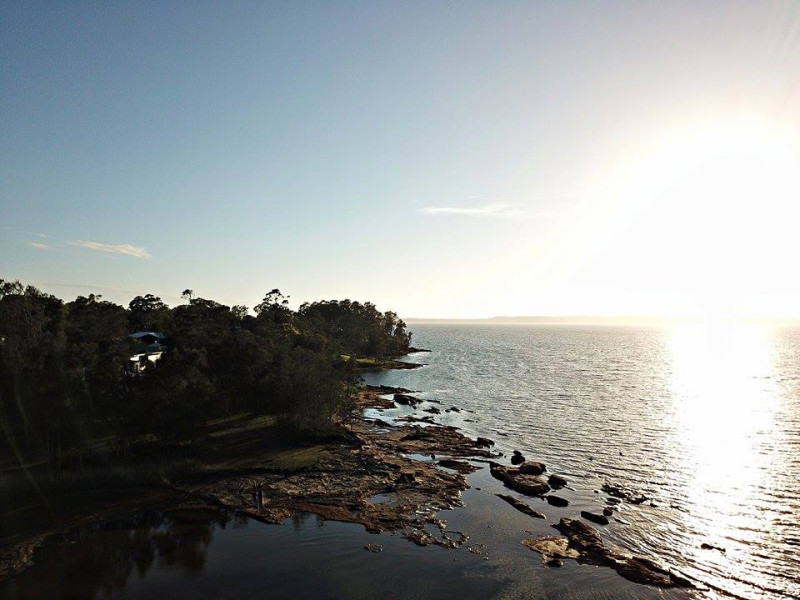 At about 5:30am this morning the Mavic Pro decided to scusesfully work and pair with the iPhone 7+. As it would turn out the airalswere the key to this scusess. I used the iPhone with the USB cable port, disconnecting the micro side port on the side. It worked perfectly allowing for a 2klm range to fly. This area however has a 120m altitude restriction, with other conditions to be met. The aircraft took off with a full charge and cood conditions. 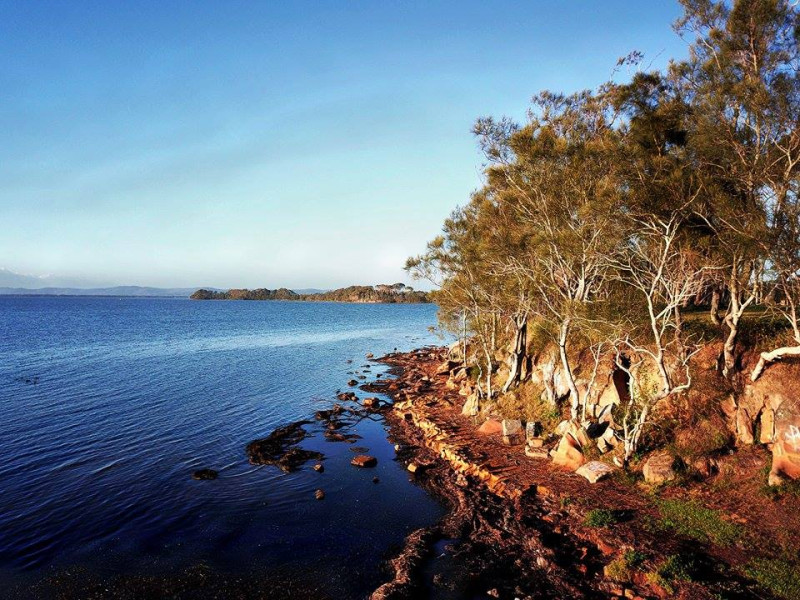 Nearby Tuesday St is what is known as Skiff Bay. As a boy I launched many Sailing Boats, Fishing DIngeys, and Wooden Skiffs from the then sandy shores. This area as a result became known to the locals as 'Skiff Bay' for many years.  What made it quite the spectacle, was that often the boats launched here were also built by myself at the time. Locals often gathered when a new wooden skiff was launched and often sat nearby observing from the rocky headlands. Over the years however, a large sandbank had formed in front of the sediment trap. The sandy beach with no one to rake it clean, is now a rocky shoreline. Near the sediment trap is now a large build up of seaweed too, decomposing and rotting along the shore. I can't stress however that this is a natural process; the seaweed build up is allowing for the growth of native trees along the shoreline, that previously have not been seen growing there. The seaweed piles play a large role in germinating the trees, and it does play a large role in the local ecosystem.  The small ponds colours white with rot, are home and a sanctuary for small fish too. Overall the biodiversity in the region is very different to when I was a boy back in the 1990's. The area looks a bit more wild, but it is certainly healthy. The landing area for the boats is now non existant, with a large gate installed at the entrance to stop vandals breaking into the nature reserve. All changes for the better. 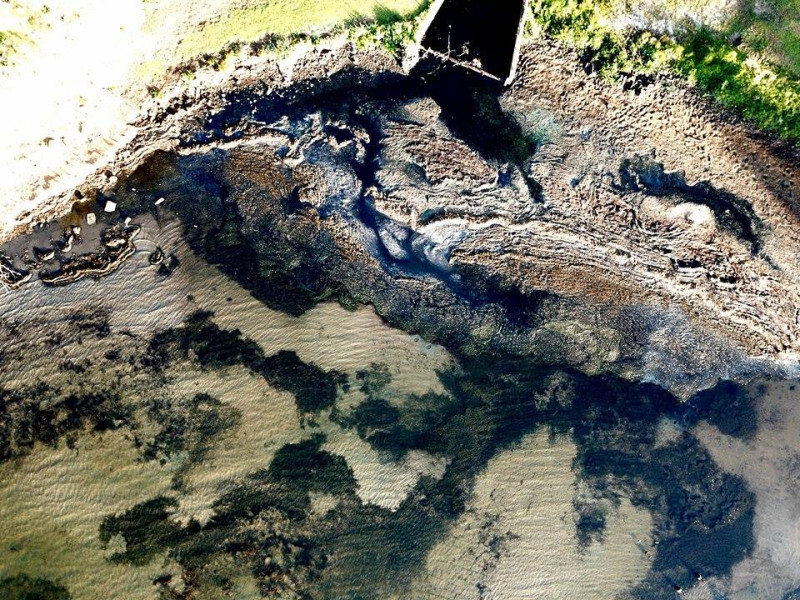 Flight Out: Over The Water

Taking a heading past the larger Tuggerawong Bay that lays past the headland of Rocky Point. With the extremidy of the headland of Wyong River and the neighboring Tacoma Bay. What is also visable is the steady drop off to the deep water that makes Skiff Bay a useable port for boats that require proximate access to deep water to lower their keel; to sail effectivly. Overall the water is calm and the low wind revealed these landscape features in stunning 4k visibility at 50m altitude. 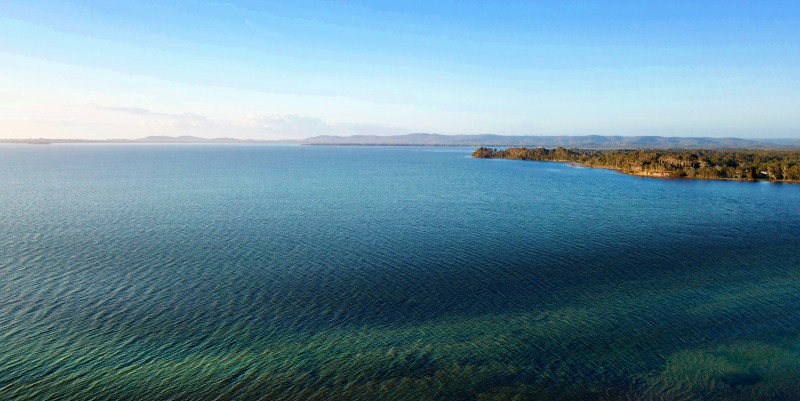 As a boy these outcrops were tidal and you could walk out to them at certain times of the month. As the Lake Entrance was closed by buildups of sand recently, the water level has stabilised within the lake. These outcropping rocks have always been a hazard for sailors, but they have always been a home for sea birds of many varieties. Often shared between Cormorants, Gulls, and Pelicans. 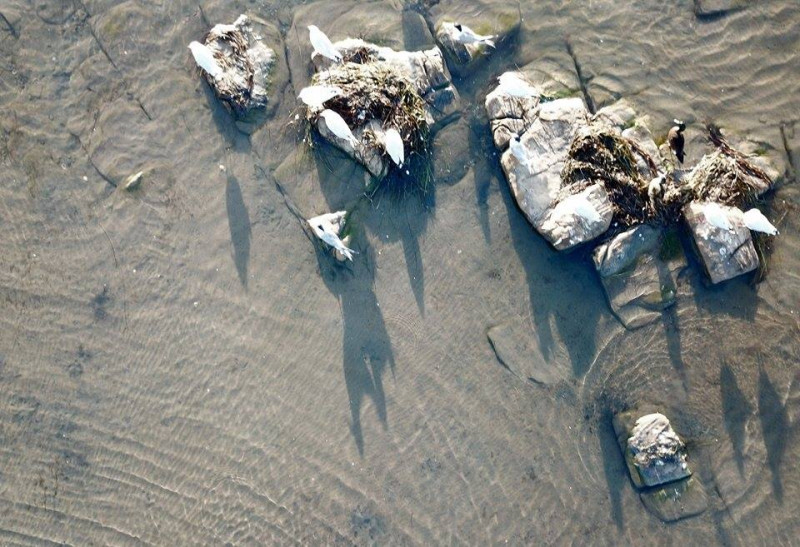 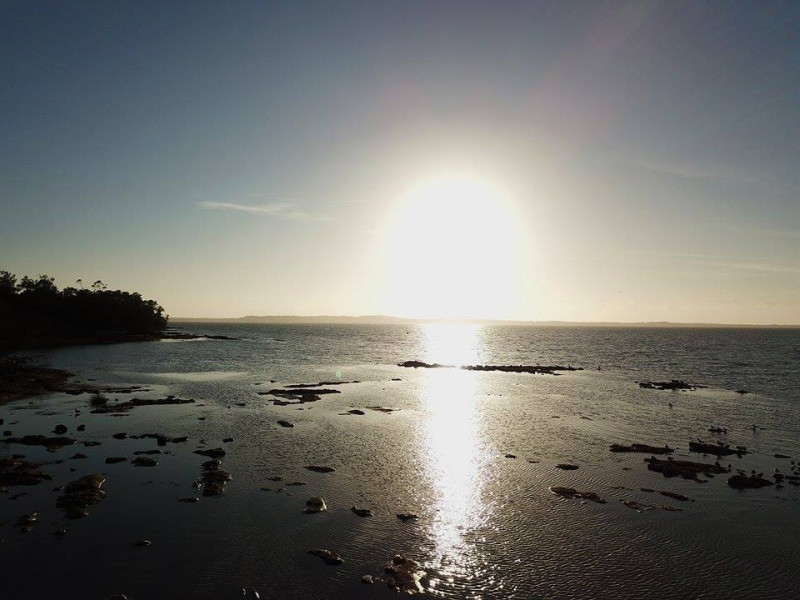 These seaweed shoals and areas can range in depth from less then 50cm to over 2m. They can be very clean, and alternatively can also harbor rotting patches. Sometimes this can be colourfull and photogenic, but it can also really smell. This is as pungent as sulfur in it's smell, that is very distinct. Often this only occurs when the storms churn up the shoal, which is most likely what occured here. 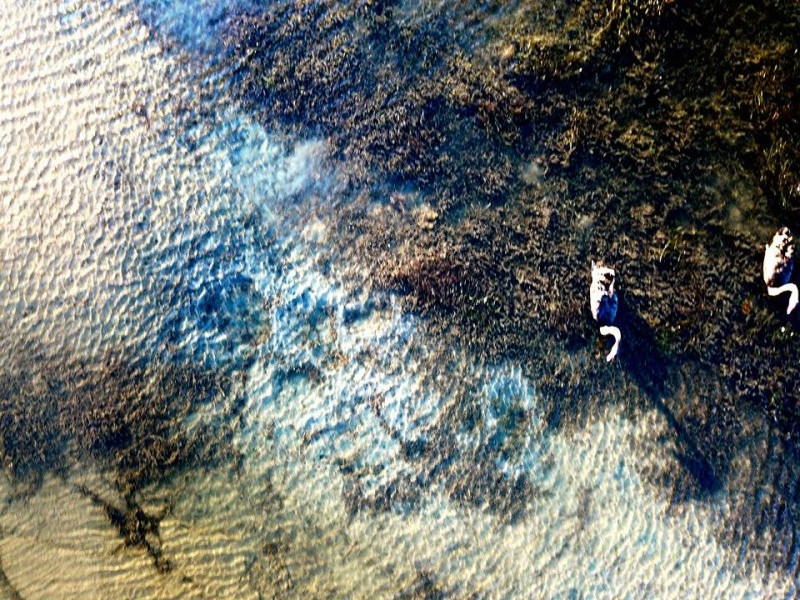 Arrow has been a popular place for local rod fisherman to gather along for many years due to the deep water surrounding the point. It sits sharply exposed in the middle of the stretch leading up to the next point. This headland is known as caves point; due to the small sandstone caves and overhangs formed over many years. It is also known as a hazzard to wise boatsmen as the point can produce waves that will sink boats and it is best to avoid the area if possible. Waves are channeled through the shallows around the rocks below and magnify their amplitude and potential. Some of the swell and waves in this area can be large and unexpected if you are not careful. Arrow is followed by two small bays. The next along is known as garden bay; as one of the locals kept quite a nice garden there, but they also were not very nice as their garden. This place was often avoided in general. Next along; Caves bay in the 90's has a concrete wharf, however it was rarely used as the bay was full of underlying rocks. Locals think it was built as a novelty rather for any real use. Not to mention you would set off into large swells around the point if you did. Just around this headland is another important point; known at ferry point, as the local post office sits up high, and in yesteryears there was a shallow water ferry, to take workers and passengers across to the Lake Inlet and township, also known as 'The Entrance'. Ironically this was mainly an outlet as the old inlet was to the north near Bugiewoy, and it was filled to make the road that now connecting the shoreline to the Pacific Highway. This was constructed to connect Toukley to Lake Munmorah in 50's, seen from black and white photographic records. Toukley Bridge is visable in the background: connecting Gorokan to Toukley.  Just on the other side of the visable point is the old wharf, now very dilapidated, only some of the old wooden pilons remain. Never the less this an excelent photograph of the now lesser known shoreline. Turning back on Skiff Bay, we can see the wide mouth and nearby acess to the shorline. Guarded by the field of rocky outcrops and islands that protect the bay. This is a stunning view that I will be hanging in my own home. It holds great significance to my family and the locals in the area. Further along; Tuggerawong Bay. A larger Bay with a long expanse of shallow waters. It is however very significant to the local ecosystem as a breeding ground for fish and home to hundreds of birds. 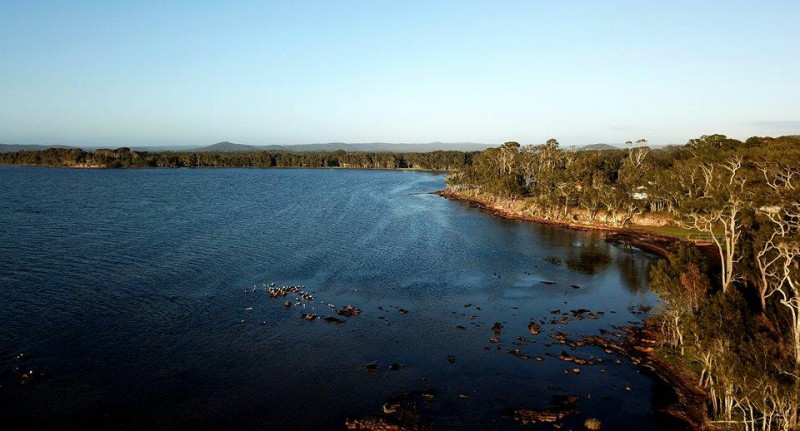 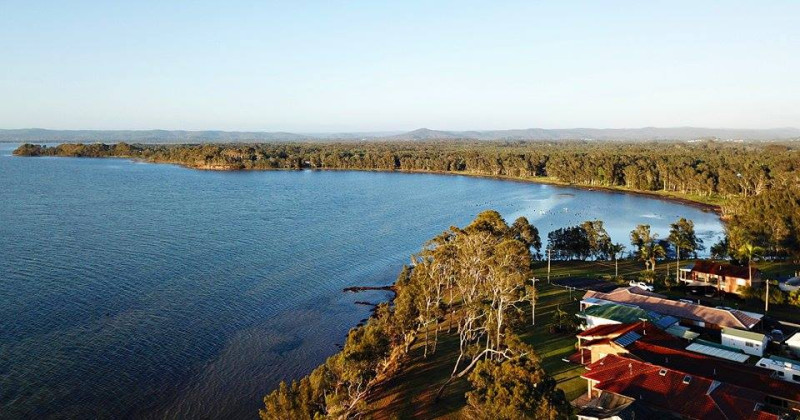 Seen from an altitude of aproximatly 80m, is the Navigation Rock in the middle of Tuggerawong Bay. Although shallow you can see the seaweed that the Black Swans feed on. Likewise, the pelicans in the area are drawn along the sandy shoals in search of fish leaving the protection of the reefs. It is good to see many birds in the area. They are also not that afraid of the aircraft flying above. This was the last picture taken before taking the aircraft back towards it's landing approach. Making its way back to the Tuesday St Park, at Skiff Bay. Seen as the J Shaped bay past the main point. Today's flight has only just started to uncover the aircraft's capabilities. I am certain that there is a huge potential for this aircraft in the future, both photographically and scientifically. Making it very exciting news for the prospects of next years expeditions. 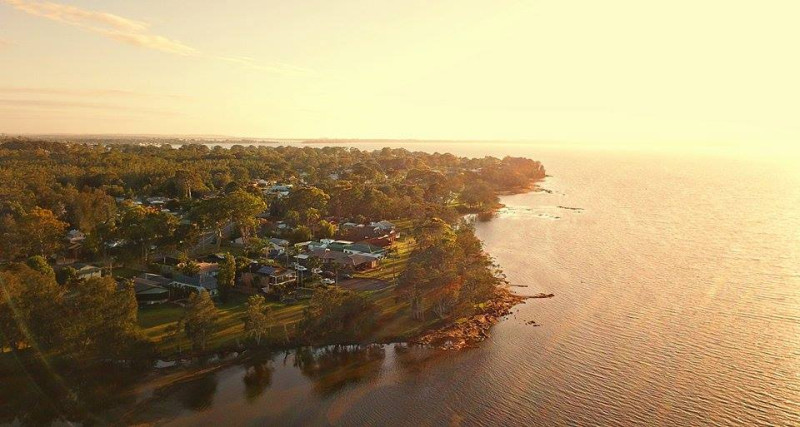 At this point in time it is important to mention that it is also the last Friday for the year. On Monday, I will start my drive back to the New England Region. In the meantime, I hope to capture a few last images in the last days of 2017.