Known in the Queensland region as the bronze bar-shouldered dove is a small blue coloured dove, with an array of strongly metallic bronze feathers around the neck and front of their wings.

These birds are very rare and uncommon in NSW; however, in the tropics, they seem to be doing very well. I have seen quite a few getting about in the streets and parks. This little bird sitting on the woodchips and mulch in a garden is trying his best to get some food crumbs. I think he got the idea I needed a picture first.

Uniquely these birds have a blue beak, and a yellow eye colouration. They are quite strange at first, as you don't expect to find blue pigeons or doves. However, after some time I found them to be good company. They are a medium sized bird, and make a soft extended cooing noise. Although a bit different to what I am used to, they are quite a special bird.

These birds have a number of factors though that make them a protected species. The birds are at risk to toxoplasmosis due to exposure to cat faeces mainly because they prefer to feed on the ground. Because they feed and walk around on the ground, they are actually at risk of being eaten by the cats too. Unlike curlews, these birds will sleep in trees and away from harm, but their numbers have declined due to feline activity. Thankfully there is a conservation effort to keep feral cat numbers down, for the better good of keeping native birds safe from being eaten. 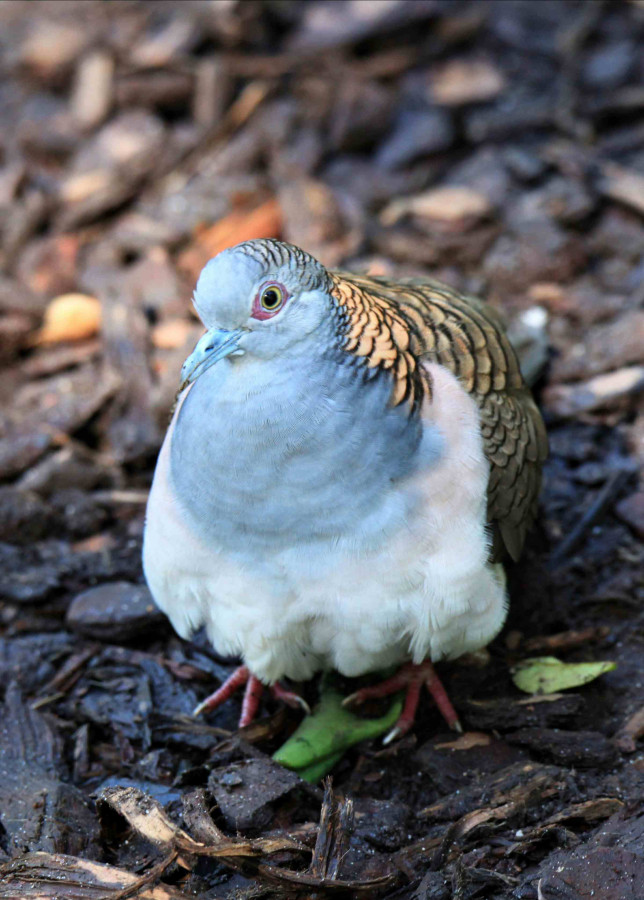 The metallic bronze wings are fantastic

I bet they are. In your photograph these martial-like feathers are a contrast with fluffy ones on his front part. And this look of kindness about his blue face.