Cracking a tough mystery - The colour of bird eggs

In the world of birds, there are only two major pigments: one being green-ish and the other a dark red-brown. Which when mixed with the shell of calcium carbonate gives an almost infinite range of textures and possibilities. With uses of these pigments dating back to the age of dinosaurs, it is certainly a long-running observation.

Firstly; not all eggs are the same. Different species of birds have eggs in differing; shapes, sizes, colours, and texture patterns. While the same calcium carbonate shell is chemically the same, its thickness and size vary widely. As no surprise to someone who can recognise an emu egg from that of a thornbill, they might have trouble between differentiating a seagull egg from a lapwing plover. For both are the same colour, texture and relative shape. Leading to the question of why?

Early on the natural world was grouped into orders of classification. With decades of calling trees, trees, and birds, birds, it was not until Charles Darwin started observing shifts in evolutionary features, was it discovered that change through time was possible. Animals could change their appearance, their physical features, and also their behaviours in order to survive. However, the mechanism to do so was unknown: until it was proposed that death itself was the key. Animals continually adapt to their environment and their own needs through natural means, by the survival of the fittest. If it does survive it passes its genes to the next generation, if it does not it will obviously remove these unfavourable traits and features from the gene pool. This could be the colour of one's feathers, or as simple as the colour of an egg.

Eggs are a very critical part in the lifecycle of a bird. It is theorised that dark eggshells help birds in colder climates, and lighter colours for birds in hot climates. As the pigment helps absorb heat, or not. While others are textured to reflect their nests, with birds in hard rocky areas that build their nests from mud and rocks to have a brown or rock textured egg. Others in grasslands with nests made of blades of straw and dried grass, having eggs in pale brown and green colours with black spots or flecks. Evident is the lapwing plovers egg that is hard to see for the surrounding grass, for its black and brown flecks and green appearance that help it blend into the surrounding field of grass. Others in the tropics having light green eggs, in exotic colours to match the primaeval backdrop of an ancient rainforest. Such is theorised by the enormous success of birds in their regions, and those also willing to migrate to these regions for this exact advantage. Like all other adapted aspects of the bird itself, their eggs are also a product of millions of years of trial and success. Simply put; if it is a matter of survival or a direct selection pressure where life or death is inevitable, it will be under constant change to best suit the environment.

Incredibly as you venture away from the equator the egg colours overall get darker in appearance, hinting again back at temperature absorbance. With researchers also observing that as you travel to the tropics eggs become lighter and also bluer in colour. With the added bonus being UVB light reflection to keep the egg safe from UV radiation. Birds that leave their nest often to search for food have well-comoflauged eggs, with texture, flecks, spots, and colours to become invisible to hunting predators. With birds that stay with their nest, having a greater colour and textural difference observed. Instead, the bird itself blends in well, or is nearer the top of the food chain. Which supports the theory of how nature itself directly effects the appearance of the egg.

A tough mystery to crack. However, if you bring in the modern scientific worlds perspectives of the natural world you can clearly see why all features of a specific animal or species are the way they are. Eggs serve a purpose in many ways. If you are in a harsh environment of life or death every day only the best will survive. With the unfavourable naturally removed. Survival of the fittest, and it is the best fit for the environment that will allways prevail. 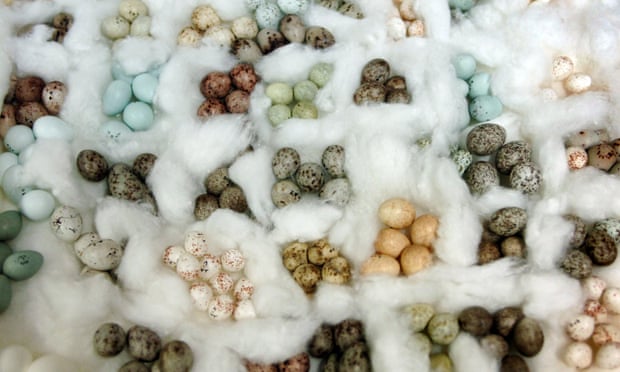